Posted by melanie at 9:33 AM No comments:

Nomenclature: How Should We Abbreviate Genes

Two round table discussions were held at the recent International Workshop for Opportunistic Protists in Hilo, Hawaii, June 2010. Results from one of these, a discussion regarding the format for gene nomenclature, is now posted for comment below by the specific organism communities as well as the scientific communities at large. We welcome all comments. Please follow the simple instructions to sign up for the blog and enter your comments in real time or as a cut and paste.

Comments will be received until the end of November, after which the authors will incorporate appropriate suggestions and prepare the summary for submission and publication.

The second roundtable regarding the future funding and research of the Opportunistic Protists will be posted soon and you will be invited to provide comments at that time.

Nomenclature: How Should We Abbreviate Genes,and Gene Products, in Opportunistic Protists and Can We AchieveUniformity?


The last decade has seen dramatic expansion of genetic, genomic, and protein characterization studies across all of the opportunistic protists investigated by members of their respective research communities. This has been facilitated both by large genome projects such as the Pneumocystis carinii genome project (http://pgp.cchmc.org/), as well as be individual laboratory efforts.1 In addition, improved biochemical methods have led to isolation and characterization of protistan proteins and their functional activities. Occasional confusion has arisen by naming proteins by their molecular weights, or by selecting gene names that are not parallel to orthologous genes in related species. In addition, due to the lack of consistent nomenclature for naming genes and cognate proteins, the literature now contains the same molecular species bearing a variety of names across multiple publications. Accordingly, the International Workshop on Opportunistic Protists-11 conducted a roundtable discussion on August 3, 2010 to find a common set of ground rules for the naming genes and related gene products in the opportunistic protistan organisms, including Pneumocystis, Toxoplasma, Cryptosporidia, Microsporidia, and other related genera.
It was generally agreed that any nomenclature system should be convenient, easily referable, and should be consistent with the publication requirements of the major journal in which work in these fields is published, including the journals of the American Society of Microbiology. The attendees were strongly supportive of adopting or modifying a previously accepted system of nomenclature. In this light, consensus rapidly focused on adopting the general system of nomenclature utilized in the Saccharomyces cerevisiae research community. S. cerevisiae represents the first organisms for which a complete genome was cloned and annotated.2 This system has further been used extensively for genetic modeling and protein characterization. As such, it represents a suitable prototype for gene and gene product nomenclature for the opportunistic protists. The Neurospora and Toxoplasma research communities have been previously adopted a similar approach.3, 4 This type of approach has also previously been proposed for Pneumocystis related genes and proteins.5
The following ground rules were proposed and discussed with majority consensus agreement.
1. Gene names will be designated by a three-letter designation followed by an integer if multiple members of that gene sequence are known. In general, the gene should be noted in all lower case italicized letters. For instance, the gene for the cell wall biosynthesis kinase of P. carinii would be designated cbk1.6
2. It was agreed that for most publications it is not necessary to designate the species of origin. Accordingly, the cell wall biosynthesis kinase of P. carinii would be designated cbk1 rather than Pccbk1. However, in a particular manuscript when orthologous genes of multiple species are discussed together, then it becomes acceptable to use the species designation. For instance, in a paper discussing both the P. carinii and P. jirovecii cell wall biosynthesis kinases, it would be appropriate to designate them as Pccbk1 and Pjcbk1, respectively, in that manuscript.
3. If the gene is known, the cognate protein should be non-italicized with the first letter capitalized. For example, the cognate protein of P. carinii cbk1 would be designated as Cbk1. The former practice of appending a lower case “p” to designate the cognate protein (i.e. Cbk1p) has fallen out of favor in most nomenclature systems over the past few years.
4. Whenever possible, the three letter designation should be based upon orthologues that are present in other species. There was general consensus, that if a S. cerevisiae existed, that the same three-letter designation should be applied for the gene in the opportunistic protist.
5. The designation of a newly isolated protein, for which the corresponding genetic sequence is not yet know, should also employ a similar three letter designation followed by an integer. The designation of proteins by apparent molecular weight was generally discouraged.
6. The designation of manipulated genes should follow the above standard with deleted genes being indicated by a “D”, i.e. deletion of the cognate protein gene would be indicated as Dcbk, and mutatated genes indicated by the addition of a superscript, i.e. a mutated cognate protein gene would be indicated as cbkmut, if multiple mutants are made these could be indicated by serial numbers, i.e. mut1, mut2, etc, or by designation of the specific mutation, i.e. ala to val would be cbkval and ala to glu indicated by cbkglu.

The above guidelines are intended to be a suggested direction to achieve greater uniformity in gene and cognate protein nomenclature. However, it is clearly understood that unique features of each of the opportunistic protists may require modification of these suggestions over time. Further refinements or modifications of these suggestions are welcome as the genetics of these interesting protistan organisms continue to evolve. 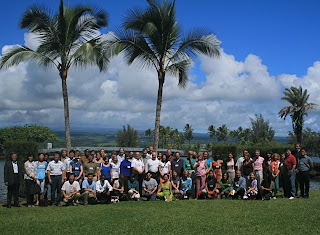 IWOP 11 met in Hilo, Hawaii during the week of August 1-5, 2010. Participants (pictured to the left) represented investigators involved in the research of Pneumocystis, Toxoplasma, Microsporidia, Cryptosporidium and the amoebae. Roundtable discussions were held regarding the importance of sustained funding for these "overlooked" organisms and for a standard system for genetic nomenclature. Investigators in these fields are invited to participate in the ongoing blog discussions on this website regarding these 2 issues. (MTC 8/16/10)
Posted by melanie at 9:03 AM No comments:

Welcome to the Pneumocystis Biology Blog. This site has been set up to facilitate dissemination, discussion and community consensus on issues that are important to the investigators who are in the field of Pneumocystis research.

This blog will be used to address issues such as selection of the genetic nomenclature system to be used for the genus and the creation of a "White Paper" that will outline the significance and impact of Pneumocystis pneumonia and colonization; the state of the art of current research; and will identify the tools, reagents and knowledge that will be necessary to move the field forward in the next decade.

These 2 issues will be discussed in a roundtable format at the 11th International Workshops for Opportunistic Protists in Hilo, Hawaii which will be held August 1-5, 2010. This blog will continue the discussion amongst the participants; with those who were unable to attend; and with the Pneumocystis community at large.
Posted by melanie at 8:45 AM No comments: